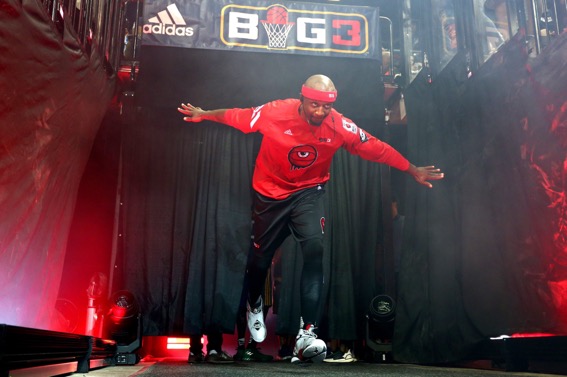 The BIG3 rolls on with week four stops in Providence, Rhode Island and Brooklyn, New York. It’s the first time the BIG3 find themselves playing in Providence, and the games took place at Dunkin Donuts Center, home of the Providence Friars. Meanwhile Brooklyn is playing host to the BIG3 for the third time! Remember they hosted last years chip? Clearly the people of Brooklyn loves them some BIG3 and who knows, maybe we’ll see the two reunite again in season four!

Let’s hit Game one, which went down in Providence between Ghost Ballers and Power. There were numerous storylines to track in this one, including the health of Cuttino Mobley, Power handling their emotions, and Ghost Ballers finding some depth in scoring. Well, we found out that Cuttino would not play... but Corey Maggette did make his season debut, seemingly out of nowhere.  Man oh man was Corey GOOD. The reigning MVP put up 23 points and 14 rebounds. The apparent achilles injury didn’t bother the star today and hopefully doesn’t bother him ever again. Julian Wright added 17 points and 6 rebounds, truly an excellent game in the shadows of Maggette. The Power dominated the glass, 31-8. It was pure dominance and little wonder they coasted to a 50-36 win and silenced Ghost Ballers in the 2nd half, holding them to just 11 points. For Ghost Ballers it was Jamario Moon with 13 and a four-pointer, with Ricky Davis adding 10. They’d look good at half with a five point lead but things in this league can change quickly and boy did they. This team clearly lacks scoring depth and it’s been evident in the last two games, losing 50-36 and 51-35 in consecutive weeks. The trio of Jamario Moon, Ricky Davis, and Mike Taylor accounted for 59 of the 71 points scored in those two weeks. That’s 83% of points scored coming from three guys. Now let’s explore more. In week two they beat Bivouac, with all 51 points coming from the same trio. In week one, that trio scored 45 of the 50. For the season the trips of Moon, Davis, and Taylor have scored 155 of the teams 172 points. That would be 90% of the teams points scored. George Gervin has a serious issue on his hands and might need to explore making a roster change. Next week you’ll see Power play Triplets, a very intriguing matchup while Ghost Ballers will play the Aliens on July 21st.

The next game had two expansion teams fighting each other as the Aliens and Enemies went to battle. The Enemies were the clear favorite to win today and they took care of business. Craig Smith continued to feast and he’s undoubtedly the most under-appreciated player in the league. He's been here for just four games and has made quite a name for himself. Craig sunk three trey balls, scored 19, and added 5 rebounds. Again, everybody was looking at Royce White, Gilbert Arenas, Lamar Odom, and Perry Jones coming into the season but Craig Smith has completely stole the show and I can’t wait to see what he does next week. Smith is blossoming into the star of this stacked Enemies team so take notice of the guy! His Enemies beat Aliens 50-39 and they’ve now won three straight and possess a ton of momentum. As for Aliens, they fall to a disappointing 1-3. This Aliens team had plans of conquering the world but clearly us humans won’t have to worry about that. Although make note that Greg Oden has done everything he can to drive the UFO in the correct direction. Today the former Buckeye scored 11 points and got 5 rebounds. You love to see Oden have another good week and continue his redemption story. If you aren’t rooting for this man... it’s time to start. Oden and his Aliens will take on Ghost Ballers next week while you’ll watch Enemies play Trilogy, the first Sunday game for Enemies this season.

The final game in Providence was a matchup of winless teams as 3’s Company and Ball Hogs squared off. I’m sure many assumed 3’s Company would win this game so it was little surprise as  they won 50-38. Andre Emmett dropped 17, Dahntay Jones scored 8 in his season debut after being called in to replace Baron Davis. However my worries about this team continues they demonstrate  severe three-point shooting. Today they made just one three and I seriously expect Michael Cooper, a trey specialist, to look into acquiring a three-point shooter. If 3’s Company wants to rise from the dead they’ll need to shoot threes at even just a decent rate! Make a change, don’t be afraid! For Ball Hogs they continue to add to the worst record in BIG3 history. Super unfortunate for Brian Scalabrine and the gang. Will McDonald got back on track as he accumulated 18 points and 4 rebounds. He’s the lone bright spot on an 0-4 team and things don’t get any easier for Ball Hogs as they’ll play Killer 3’s next week... Ouch. 3’s Company will be treated to a game with Bivouac. Can they win two straight?

Next up the highly anticipated Brooklyn slate of games. Brooklyn has shown out with amazing crowds in the previous two years and things were no different come the third time around! The first game of the day was between Triplets and Tri-State. Lisa Leslie watched her team drain six threes in this game and you know in a game to 50, a team who makes six threes is not losing. Triplets took those 18 points and exploded to a 50-37 win. Some things never change, like the awesome crowds in Brooklyn and like Joe Johnson hitting yet another game-winner! Iso Joe sunk a four-point bomb to seal the deal and boost his team to a 4-0 record. He scored 17 and added 7 boards plus 4 assists. Joe is your leading MVP candidate. Al Jefferson added a double-double with 14 points, 10 rebounds, and 2 blocks. Heck of a game for Big Al. For Tri-State it was Jason Richardson who showed up with a big 20. You have to love seeing JRich go out there and thrive on the big stage again! Amar’e Stoudemire added 13 points and 6 rebounds but they just couldn’t overcome the powerhouse Triplets. We’ll also have to monitor the health of Nate Robinson as he took a whack to the face. Hopefully he can heal up quick as his team needs him badly, falling to 1-3. Next week we’ll see a highly anticipated matchup between Triplets and Power while Tri-State will take on 3 Headed Monsters.

The next game was between Bivouac and 3 Headed Monsters. Bivouac won this game 50-43 leading wire to wire. It was a dominant win for the army of ants, and each member of the army contributed. Will Bynum got his 13, C.J. Leslie had 12 while Shawne Williams had 9. Each player on the team scored at least 4 points. That’s a really under the radar stat but I know how important depth scoring is. Just look at Ghost Baller's struggles. Speaking of struggles, 3 Headed Monsters continue to flounder, unable to find success. I don’t know what’s going on with them but geez they need to step it up and play to their potential. Rashard Lewis had just 7 points and Mahmoud Abdul-Rauf, Larry Sanders, and Tre Simmons were able to combine for 2 points... Brutal. Props to Reggie Evans for working hard and producing yet again as the big man had 21 points and 13 rebounds. He’s likely going to be your rebound king for the season. I can’t stress enough how badly 3 Headed Monsters needs to step things up, before they know it it’ll be seasons end and a playoff berth might not be clinched. Next week, Bivouac takes their 2-2 record to a match with 3’s Company while the 3 Headed Monsters and their 2-2 Record will square off with Tri-State.

The final game of the weekend was a bout between Trilogy and Killer 3’s. Trilogy came in to this game as an underdog yet again but Kenyon Martin and his group had other plans. David Hawkins willed his team to victory with 21 points as Trilogy beat the Killer 3’s 50-48. James White added 10 points and 9 rebounds. Is Trilogy starting to look like the team of old? Can they actually make a run at a playoff berth and rattle off some more wins in the coming weeks? They’ve beat two of the better teams in this league in back to back weeks so you have to be impressed because they could’ve easily given in already. For the opposition Killer 3’s, Donte Greene led the way with 18 points and 3 steals with Stephen Jackson scoring 12 along with 2 blocks. I’m not worried about Killer 3’s as they look pretty good so far and this loss isn’t something I’d stress out over. I think today was more of a testament to how much Trilogy has improved thus far! Next week we’ll see if Trilogy (2-2) can knock off another top tier team in Enemies and Killer 3’s (3-1) should be 4-1 after a date with Ball Hogs.

Of course I need to extend a special shoutout to Charles “Choo” Smith and Eric “Broadway” Jones. They went to Brooklyn on their own and gave some kids the opportunity of a lifetime to play on the BIG3 court at halftime of a game. This is an experience they’ll never forget and it’s all thanks to Choo and Eric for going out of their way to make this happen!

Next week the tour heads to Kansas City, Missouri and Oklahoma City, Oklahoma. Can’t wait to see what week five holds as this season is in full swing and the push for the playoffs begins to take shape!