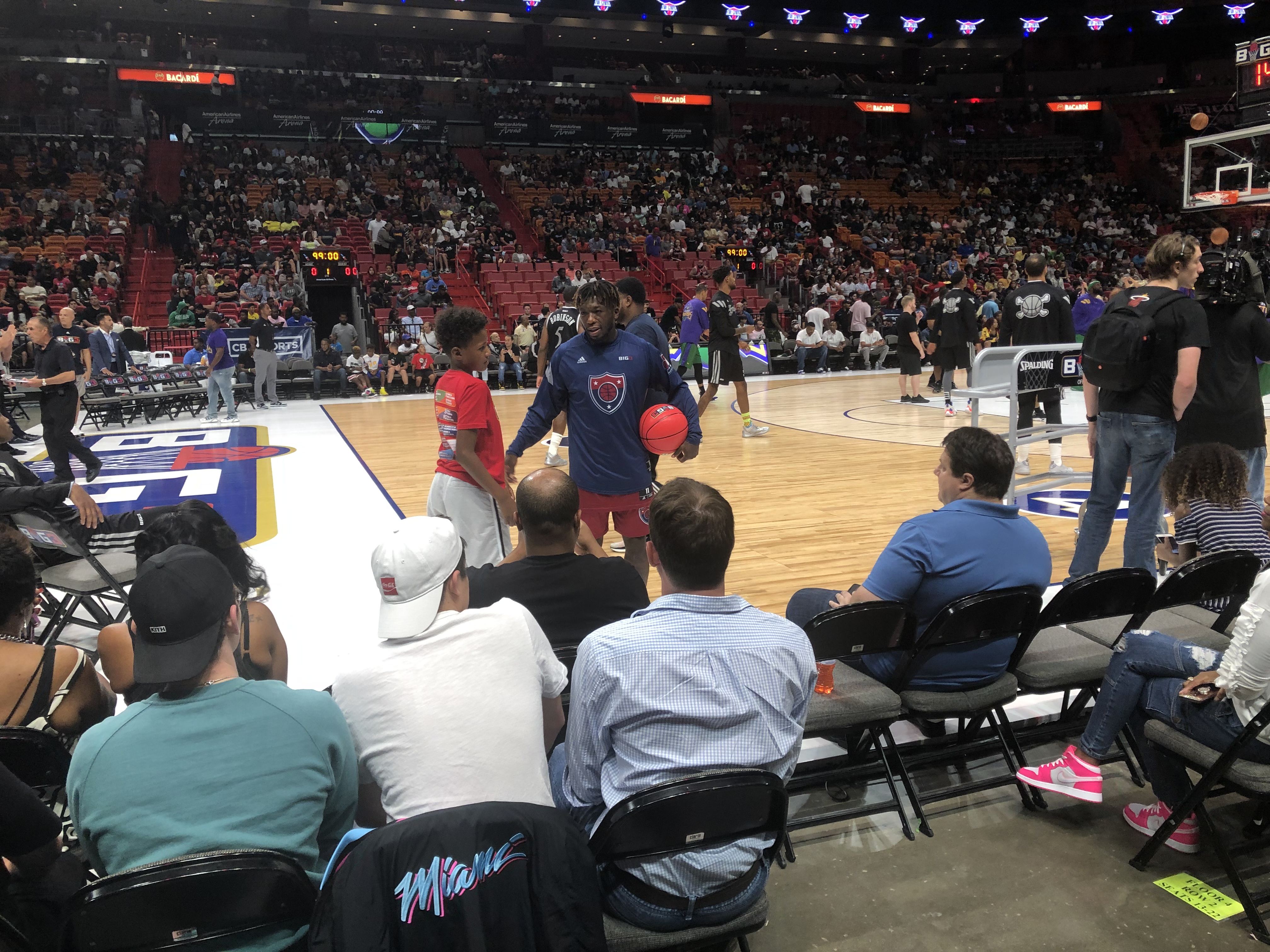 It’s absolutely nuts that the BIG3 has already reached and completed week eight of it’s third season. That means just one more week remains until playoff season is upon us! Week eight went down in Miami, Florida at American Airlines Arena and we were fortunate to see three solid games, some good performances, and a really amazing cameo by the Young3!

The first game of the night was between Enemies and 3 Headed Monsters. Two teams on the brink of elimination so losing was not an option for either club. While I’m sure every Enemy knew that, it was just Craig Smith who produced as he scored 16 in what was a bounce back game for him. His 16 actually accounted for half of his teams point total as Enemies fell 50-32. A very poor performance from the team many thought to be championship caliber. This loss has all but knocked them out of the playoff picture and now it’s all about waiting to see how this team bounces back in season four. For 3 Headed Monsters, it was a balanced attack that led them to victory. Mahmoud Abdul-Rauf scored 13 and drained three 3’s. Rashard Lewis added 11, Larry Sanders scored 8 and corralled 5 rebounds while blocking 3 shots. 3 Headed Monsters move to 3-4 and they’ll play Power in their season finale. As for Enemies, they take on Killer 3’s and now have a record of 3-4.

Game two was absolutely insane as Power and Tri-State delivered another classic battle. Tri-State pulled off an absurd comeback thanks to Nate Robinson and his dominance. Nate scored 20 and drained four 3’s and went off in the late stages of this game to secure the upset win and shock the BIG3 world! He cashed out on the game-winning 3 which was also an and-one as Glen Davis caught him after the shot and carried him in the air while Nate put his arms up in celebration. Just a fascinating moment to see these two former Celtic teammates create another iconic Big3 moment together. It’s great to see somebody who supports our Young3 like Nate does, go out there and THRIVE on the big stage. He certainly made a lot of Young3 kids super happy tonight! You also had a stellar game from Jason Richardson with 19 points and 11 boards. Amar’e Stoudemire scored 9, caught 5 boards, and blocked 4 shots and I can’t emphasize enough just how great this win is for Tri-State amidst a disappointing season. As for Power, Corey Maggette scored 19 but sadly Quentin Richardson got hurt. Nancy Lieberman is so annoyed by the constant injury bug her team has had over the last two years and exclaimed, “All we need is a HEALTHY team!” She’s right, a healthy Power team is the best team in this league, don’t fight that statement! In the post-game presser, Amar’e Stoudemire complimented Nancy and her Power team. He stated that it’s annoying to play Power because they study hard each and every week, they game plan like it’s a NBA playoff game. That’s just the highest of praise for Nancy and her entire teams preparation. Power sitsat 5-2and they’ll play 3 Headed Monsters next week. For Tri-State they move up to 3-4 and play Aliens next time out.

The last game of the night was a clash between Ghost Ballers and Trilogy. Simply put, this game was incredible. It came down to the wire. With the game at 47-47, it’s point game and anybody can win. Solomon Jones stepped up, put up a three, and called ball game. Ghost Ballers 50, Trilogy 47. This game was HUGE for the playoff picture as Ghost Ballers moved all the way up into a tie for 3rd/4th place. Things are getting hectic! Mike Taylor was super hyped about the win and came into that press conference screaming “GHOST!!!” This win meant a ton for Ghost and it was evident in the joy they exuded in the press conference. Chris Johnson had 14 and 7 boards, Alex Scales hit three 3’s and scored 13. Mike Taylor displayed his energy all over the floor as he totaled for 8 points, 7 rebounds, and a steal. Another guy showing love at Young3 events, balling out in the BIG3, gotta love it. I asked the team about the value that Chris Johnson brings to their team and what they see as the biggest difference in their performance since they traded for Chris. Alex Scales answered my question and said, “He’s so valuable to this team and it’s a huge difference on how we play! We haven’t had a post presence since day one. We were always just out there playing with a lot of heart, and needed four guys to play big. It’s a big plus, something that we need, and I know you see in the last two games how big of a role he’s played for us.” On Trilogy’s side of things, tough, tough loss... especially when you received three very good performances... Samardo Samuels had 16 and 13, James White went for 14 and 9, David Hawkins dropped 10 with 6 boards and 4 assists as well as two steals. With the loss, Trilogy drops to 4-3 and they match up with 3’s Company in the finale. For Ghost Ballers, they also hold a 4-3 record and they go toe to toe with the Triplets to close things out!

The Young3 invited multiple kids to go on the court and demonstrate some of their skills. The crowd was buzzing with excitement as they watched Stevenson Joseph, Julian Gardoza, Hailey Stephenson, Cayden Daughtry, Maynor Maldonado, Hudson Truby, Coach Lisa Leslie’s son MJ , and Corsley Edwards son Corsley Edwards III made bucket after bucket. The experience ended with Cayden Daughtry showing off a 360 layup which got the crowd oooooing and ahhhhhing. These kids were speechless, as they walked around the court, as they warmed up, after they participated. They all looked so happy and couldn’t believe what just happened, they partook in a super rare opportunity thanks to their fantastic teamwork and excellent basketball skills. Not only was this a moment they’ll never forget, it’s a weekend they’ll cherish forever... Just an incredible performance by these young boys and girls!

Next Saturdayin Dallas, Texas is going to be super hectic! There’s currently a four way tie for 3rd/4th place, the final two playoff spots. Then, you’ve got five teams at 3-4on the outside looking in. We’re bound to see multiple teams at 4-4, the question is if they are tied for 4th place and if so... Who gets in? We’ll find out shortly!