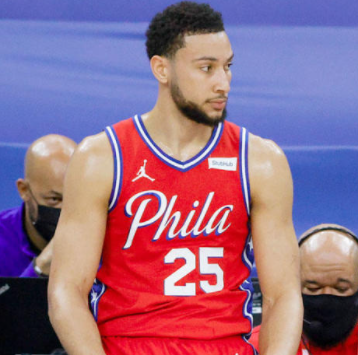 Ben Simmons practiced with the Philadelphia 76ers on Sunday, the first time since his trade demand.

One would assume this to be a rather awkward session, knowing that Simmons no longer wanted to play for or with the Sixers.

But, according to forward Tobias Harris, "it was perfectly fine”.

"The vibe was what it was," said Harris. "Was it perfect? No. But we're here to do a job, and that's to win basketball games. We put on our big boy pants and get on the floor and do what we do."

Harris also said that Simmons "looked great” Sunday and that the 76ers will let bygones be bygones if that's what’s required to win a championship.

"We're grown men here," said Harris. "This is not middle school, seventh grade, eighth grade, 'Oh, you did this to me.' No. It's, as soon as we step on that floor, it's just basketball. Honestly, that's the way it should be."

"He just showed up, you know? It was not like it was something special," said Korkmaz. "It was, 'Hey, how are you? What's up?'"

No decision has yet been made about Simmons’ status for the NBA season opener on Wednesday at New Orleans.

There’s still a decent amount of mystery in the air when it comes to Simmons’ return status, but according to Sixers teammates, he’s expected to talk on it at some point this week.

Simmons still needs to answer questions like whether he still desires a trade, and if he even wants to play for Philadelphia this 2021-22 season - furthermore, what is it that had turned him off from the team?

During his four seasons with the Sixers, Simmons averaged 15.9 points, 8.1 rebounds and 7.7 assists. The 25-year-old had a remaining four years and $147 million on his max contract when he had opted for a trade.

Coach Doc Rivers had shared that he’s going to "wait and see" if Simmons plays in New Orleans. "Just watching him, I thought he was in decent shape," said Rivers. ”Still not, obviously, game shape."