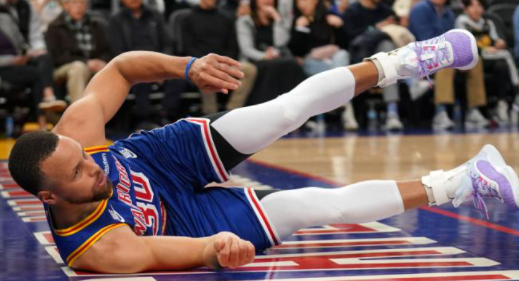 Celtics’ Marcus Smart was thought to have dove into Curry’s knee.

Coach Steve Kerr did not appreciate Marcus Smart’s lunging move at Curry, and had a talk with the Celtics star following the game.

“I thought it was a dangerous play. I thought Marcus dove into Steph's knee,” said Kerr.

“That’s what I was upset about. Lot of respect for Marcus, he's a hell of a player, gamer, competitor. I coached him in the World Cup a few summers ago. We talked after the game, we're good. I thought it was a dangerous play, just let him know.”

Curry, who had three points on 1-for-4 shooting, was injured with 4:19 left in the second quarter - where he resided along the sideline trying to secure a loose ball as Smart made his diving plunge, landing on Curry’s leg.

A pain-ridden Curry got back up, limping along before he made his exit moments later.

This was when Smart made yet another aggressive move, receiving a Flagrant 1 foul 4:09 preceding halftime, leaping and catching his leg on Klay Thompson’s shooting arm.

Kerr commented that Curry was undergoing an MRI for his injury.

Warriors forward Juan Toscano-Anderson said that while Smart wanted the ball in that moment, he may have been able to use more caution.

“I don't think it was a dirty play,” said Toscano-Anderson. “... We all know that's Marcus Smart, though, that's how he plays, he's gritty.”

Wednesday’s injury was an unfortunate event for the two-time MVP Curry, as it struck two days after he scored 47 points on his 34th birthday in a 126-112 victory against the Wizards on Monday.

In good news regarding injury recovery, Draymond Green was able to come off the bench for a second straight game as he continues to regain strength from his back injury, with his minutes increasing from 20 to 22.

Here’s to a speedy recovery, Steph.

Up next, the Celtics will go on to face the Sacramento Kings on Friday, with the Warriors up against the San Antonio Spurs on Sunday.