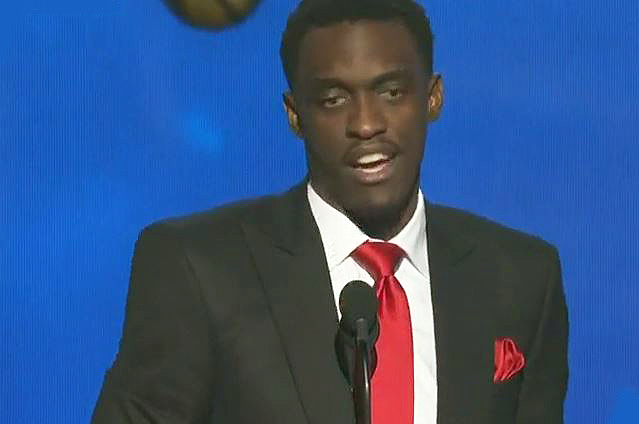 "His story is amazing and it shows what hard work and belief in yourself can do”.

With an average of 16.9 points per game (up from 7.3 the previous year) in his third NBA season with Toronto and overall, Siakam is the first Raptor to receive this honor – beating out other finalists D'Angelo Russell of the Brooklyn Nets and De'Aaron Fox of the Sacramento Kings.

Siakam’s family was in the audience, including his mother, who was shown emotional and beaming with pride over her accomplished son.

“I definitely got my hard work from her, you know, just always being a superwoman,” Siakam said of his mom.

He then went on to honor his late father, who lost his life in a car accident in 2014.

"For the people who know my story, also know how important my dad is and him not being able to be here today," said Siakam. "He had this crazy dream ... he always believed this would be possible one day …  I'm just blessed to be able to make his dream a reality and have the opportunity to keep it alive."

Siakam concluded his speech by thanking the championship team that helped him get to this special place in history today.

"I want to thank the Toronto Raptors for believing in me — a little scrawny kid from Cameroon, 180 pounds, soaking wet," he laughed.

The always-improving Siakam had averaged 19 points and 7.1 rebounds during the 2019 playoffs; up from 6.6 and 3.6 the previous year.

"We are so proud of Pascal," said Raptors president, Masai Ujiri.

"His story is amazing and it shows what hard work and belief in yourself can do. We first met him at Basketball Without Borders in 2012, and seven years later, he is an NBA champion."

That he is. We congratulate Pascal Siakam on his incredible achievement, and can’t wait to see what’s next for the young star.