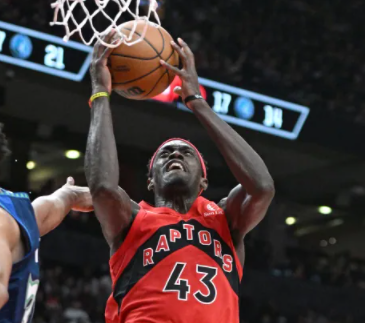 The Raptors took down Minnesota 125-102, also with help from Gary Trent who scored 29 points, OG Anunoby who scored 22, Scottie Barnes who added 17 and Precious Achiuwa who added 13.

Toronto impressively overcame a 17-point second-quarter deficit to finish with a 4-0 homestand. The team is now two games ahead of the Cleveland Cavaliers for sixth place in the Eastern Conference following Cleveland’s loss to the Dallas Mavericks.

Siakam told reporters that he enjoyed dishing out the assists. “Every time down the floor everyone was open”, he said.

The 27-year-old power forward had six turnovers in Wednesday’s game, along with failing to score 20 points for the first time in six contests. He also made just five of 15 field goal attempts.

“He brings a certain amount of attention to him”, said teammate Trent of Siakam. “He did a great job of facilitating, finding everybody tonight and getting guys open shots.

Timberwolves coach Chris Finch, who is formerly a Toronto assistant, also shared some words of praise regarding “Spicy P”, referring to him as super dynamic.

For Minnesota, Karl-Anthony Towns had 16 points along with 10 rebounds, with Anthony Edward scoring 24 points.

This was the Timberwolves’ fourth loss in five games. “Things are tough right now”, said Finch. “We’ve got to plow through them.”

The Raptors go on to face the Orlando Magic on Friday, while the Timberwolves will matchup against the Denver Nuggets.